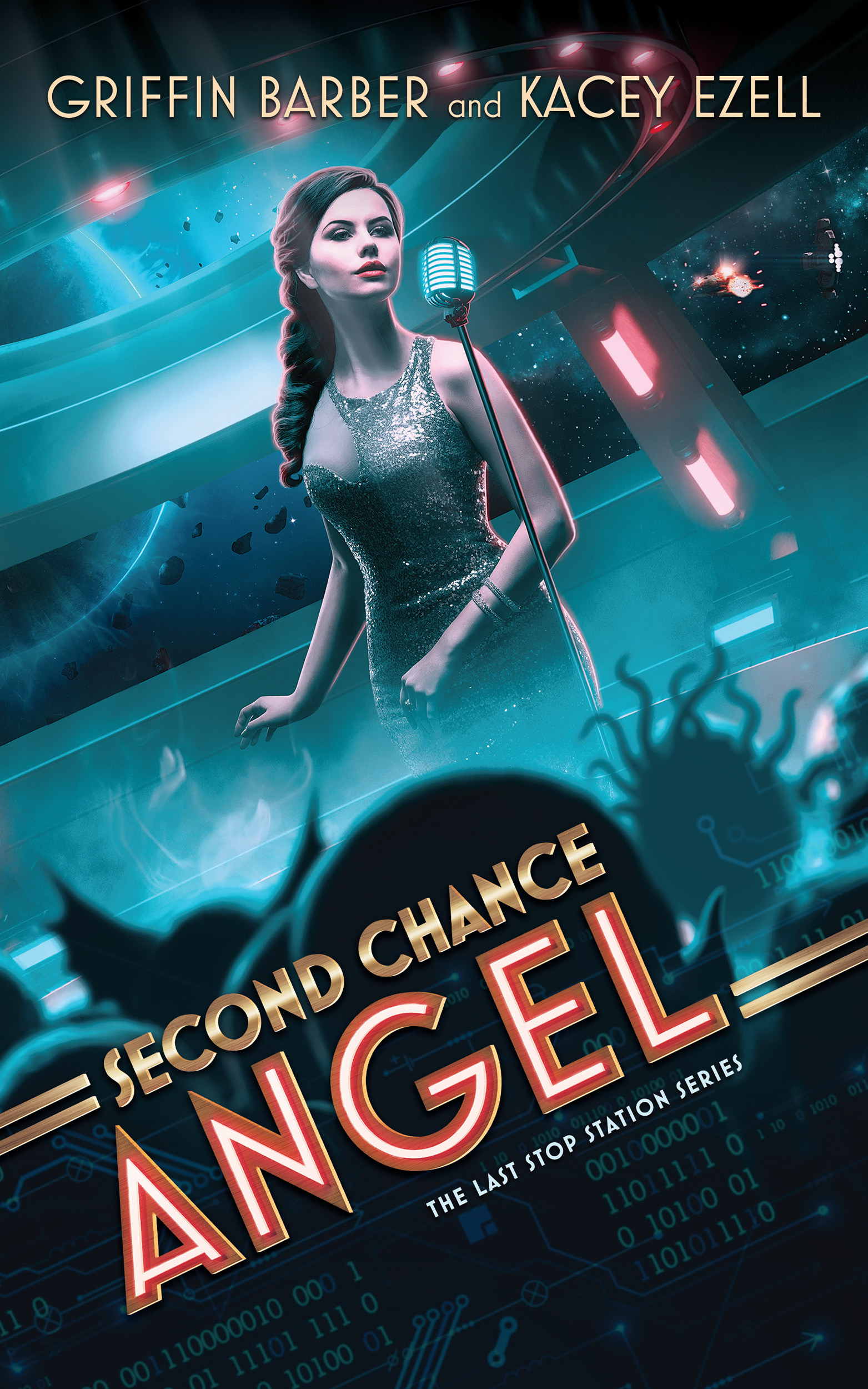 Second Chance Angel is Coming to better book sellers in all formats September 8th! Damn, but I love the cover!

"Vivid action and intelligent backgrounds as the team unravels a criminal conspiracy that well above their pay grades." - Dave Drake, author of Hammer's Slammers

"The human/AI detective theme hasn't been done this well since Isaac Asimov's Life Bailey and R. Daniel Olivaw  novels...with the advantage that AI science in Second Chance Angel is that of the modern era, not Asimov's time." -Eric Flint, Author of 1632

"[A] fun, noir-tinged thriller...Barber and Ezell weave together intrigue, action, and romance, all with a hard-boiled sensibility...Readers will be hooked." -Publishers Weekly

So, I've already talked about Chuck Gannon, AKA: The Rainmaker. I've written in his Caine Riordan universe once before, a story called Crate 88, that appeared in Lost Signals.

Man-Eater is a novella that picks up the story of Lost Soldiers Chalmers and Jackson, two Army CID men who get caught up doing a job well outside their MOS, in unfriendly circumstance. That would be bad enough, but Chalmers and Jackson have a history, see. And all that happened between the partners hasn't been good. Chalmers, though, has vowed to do better with this new opportunity. 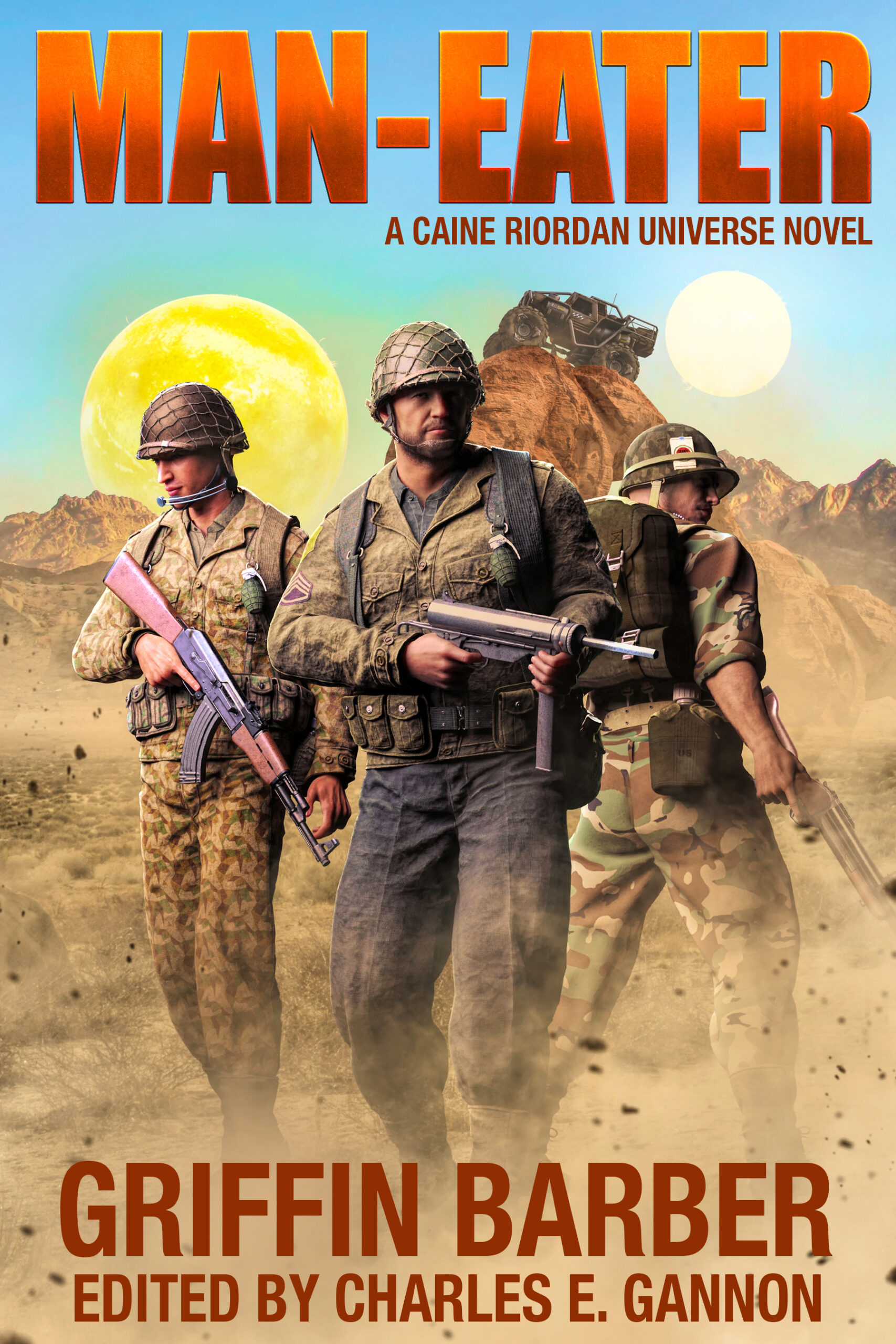 The mission consists of a mixed group of up-timers and down-timers, including paramedics, a squad of soldiers with railroad-building experience, a spy and a pair of swindlers. On reaching India the mission finds a grieving emperor obsessed with building the Taj Mahal, harem-bound princesses, warrior princes, and an Afghan adventurer embroiled in the many plots of the Mughal court.

When the Emperor learns of what befalls his empire and children in the time that was, he makes every effort to change their fate. But emperors, princesses, and princes are no more immune to the inexorable waves of change created by the Ring of Fire than are the Americans themselves.

The Dark Side of Science Fiction and Fantasy

The silky note of a saxophone.  The echoes of a woman’s high heels down a deserted asphalt street.  Steam rising from city vents to cloud the street-lit air.  A man with a gun.  A dame with a problem…

From the pulpy pages of Black Mask Magazine in the 1920s and 30s, through the film noir era of the 1940s, to today, noir fiction has lured many a reader and movie-goer away from the light and into the dark underbelly of society. Names such as Raymond Chandler, Dashiell Hammett, and James M. Cain; titles like The Big Sleep, The Maltese Falcon, The Postman Always Rings Twice… these have inhabited our collective consciousness for decades. Humanity, it seems, loves the dark.  And within the dark, one figure stands out: that of the femme fatale.

Here then, Noir Fatale an anthology containing the full spectrum of noir fiction, each incorporating the compelling femme fatale character archetype. From straightforward hardboiled detective story to dark urban fantasy to the dirty secrets of futuristic science fiction—all with a hard, gritty feel.

As Raymond Chandler said, “Down these mean streets, a man must walk who is not himself mean, who is neither tarnished nor afraid.” Because, as these stories prove, doing the right thing doesn’t necessarily mean you get the big bucks or the girl. But you do the right thing anyway.

A genre-spanning anthology of noir fiction written by an amazing crew of writers, Noir Fatale also contains my first published short story to feature the character of the Necromancer, entitled A Goddess In Red. 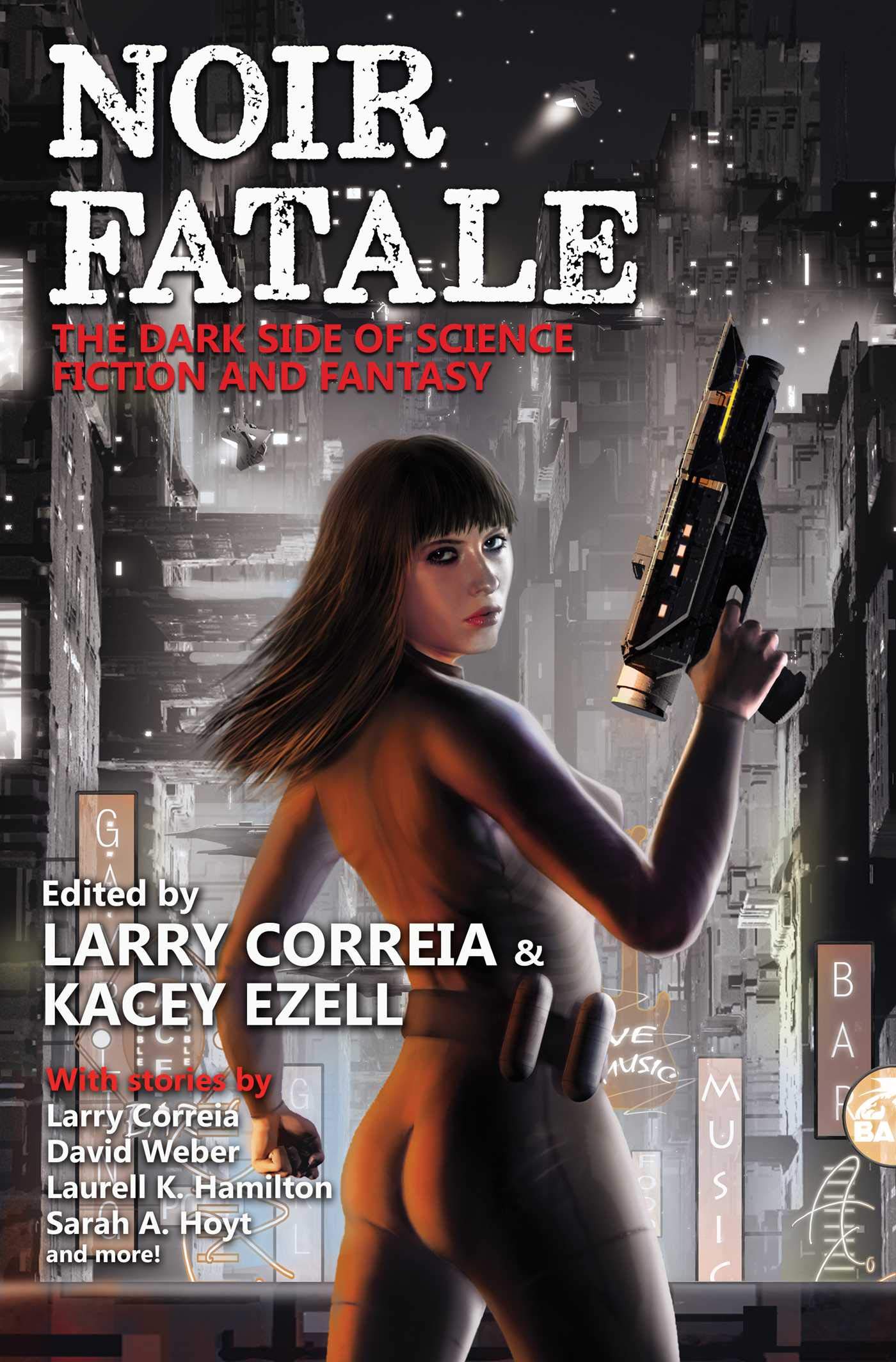 Voices Of The Fall 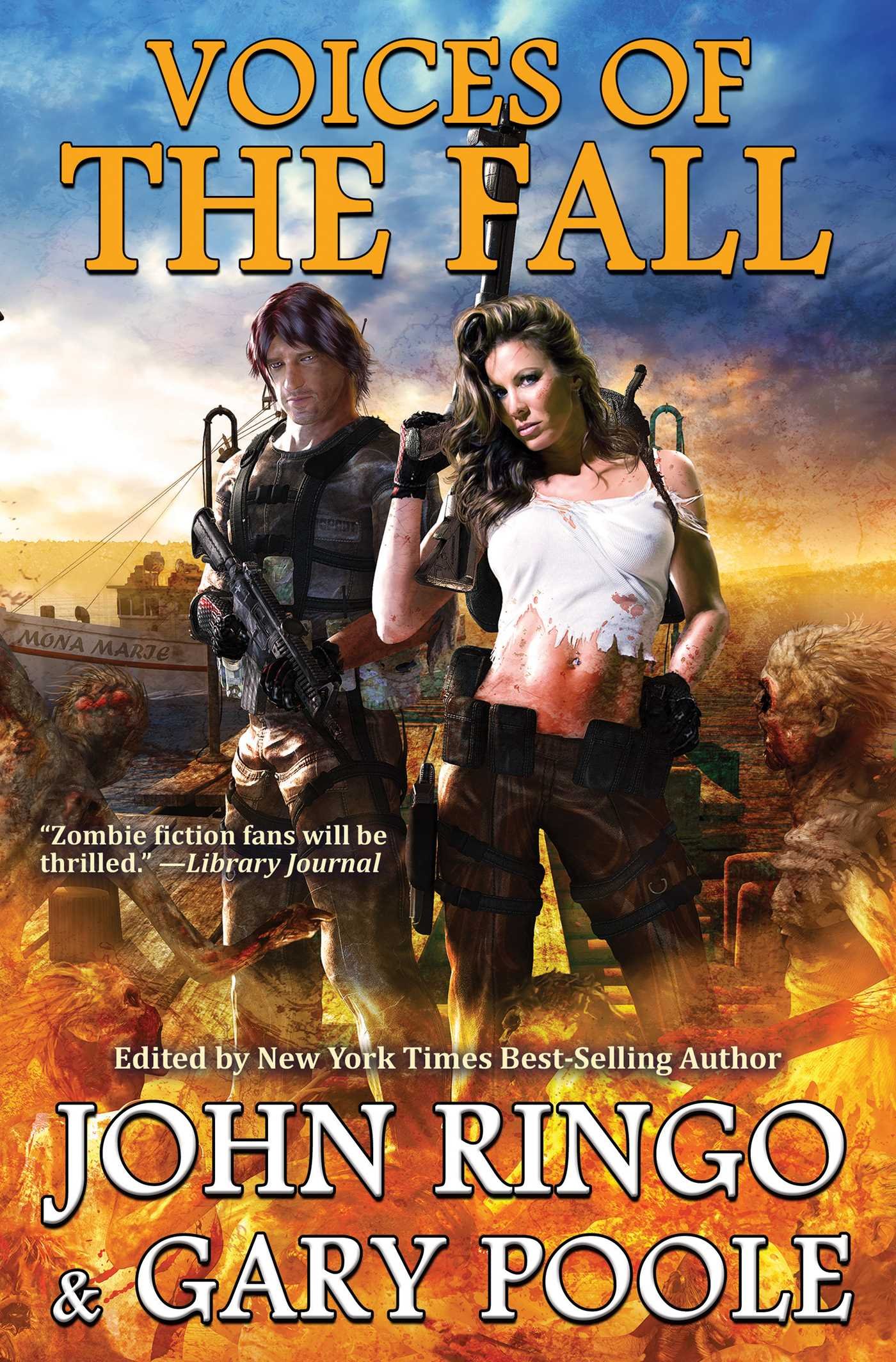 Civilization had fallen. Everyone who survived the plague lived through the Fall, that terrible autumn when life as they had known it ended in blood and chaos.

Nuclear attack submarines facing sudden and unimaginable crises. Paid hunters on a remote island suddenly cut off from any hope of support. Elite assassins. Never-made-it retirees. Bong-toting former soldiers. There were seven and a half billion stories of pain and suffering, courage, hope and struggle crying out from history: Remember us.

The most popular alternate history series of all time continues. When an inexplicable cosmic disturbance hurls your town from twentieth century West Virginia back to seventeenth century Europe—and into the middle of the Thirty Years War—you'd better be adaptable to survive. And the natives of that time period, faced with American technology and politics, need to be equally adaptable. Here’s a generous helping of more stories of Grantville, the American town lost in time, and its impact on the people and societies of a tumultuous age.

Edited by Eric Flint and Walt Boyes, the editor of the Grantville Gazette magazine from which the best selections are made, these are stories that fill in the pieces of the Ring of Fire series begun with Flint’s novel 1632. The setting has become a political, economic, social and cultural puzzle as supporting characters we meet in the novels get their own lives, loves and life-changing stories. The future and democracy have arrived with a bang—an historical explosion with a multitude of unforeseen consequences.

My Story, Bank On It, Appears In This Fine Anthology Of Eric Flint's Ring of Fire tales. It Was My First Fiction Sale, And A Story I Am Quite Proud Of, Especially As It Was Selected For Inclusion In This Anthology, Which Is Something Of A Best Of Collection Drawn From Recent Years Of Grantville Gazette Magazines. 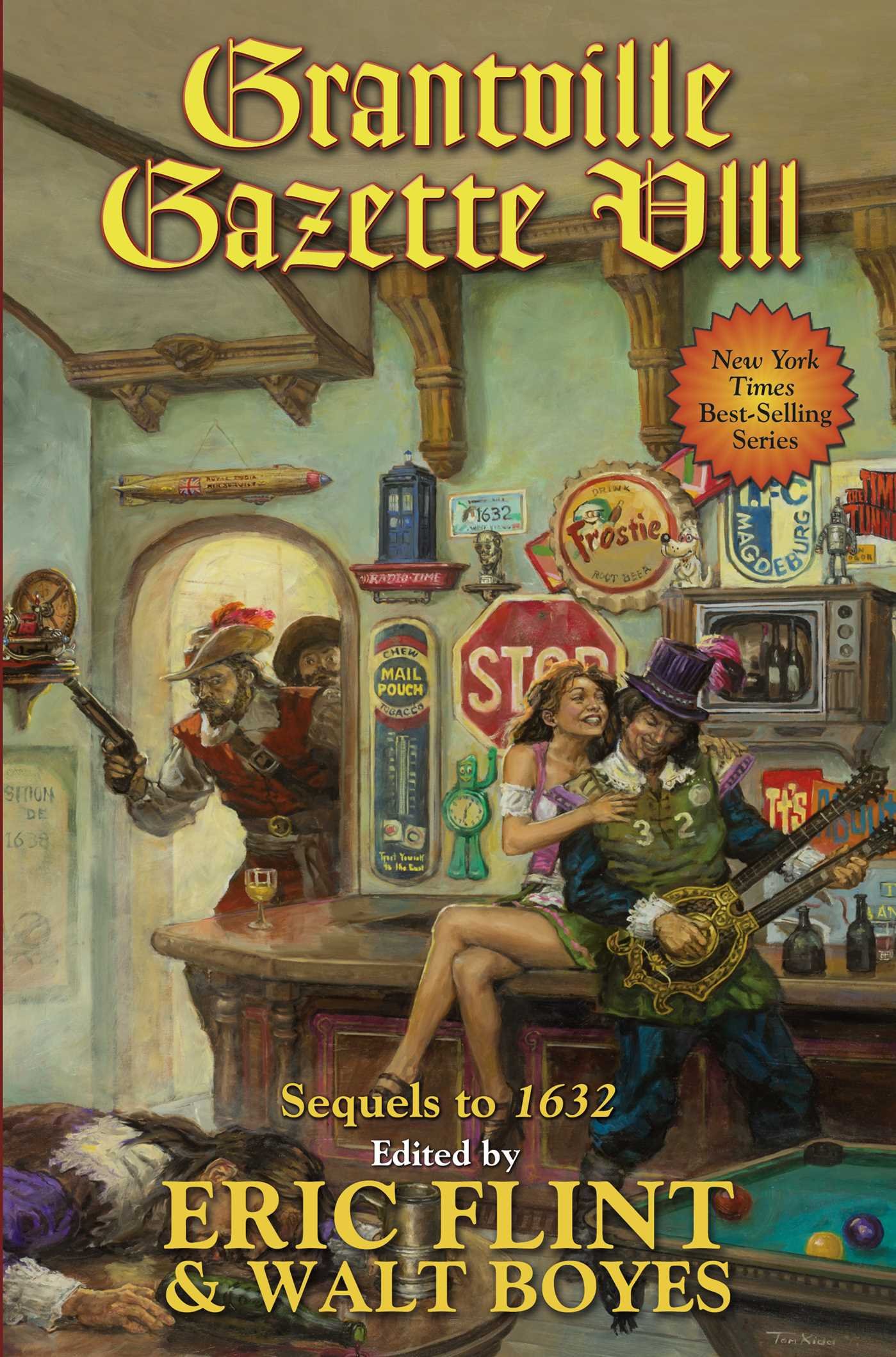 Lost Signals Of The Terran Republic

When Charles Gannon, better known to his friends as Chuck Gannon, and best known to me as Chuck "The Rainmaker"  Gannon, invited me to play in the universe of Caine Riordan, I leapt at the chance. Not only did Chuck influence my every step along the road to my first publication, he's provided me several opportunities to write in places I had not thought to look, and along the way become a fast friend. I owe him a great deal, and not only for including my story, Crate 88, among the other amazing tales in this collection. 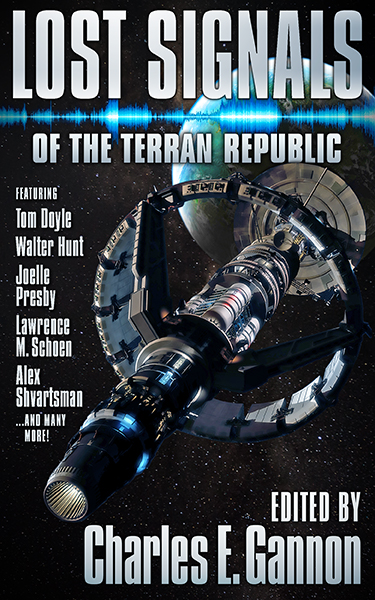 Welcome to the Terran Republic of the Twenty-Second Century. Just as humanity finally reaches out to the stars, it is challenged by several “exosapient” species whose motivations are as unusual as their physical forms. Troubleshooters like Caine Riordan—as well as commandos, crewmen, and correspondents— contend with both humans and aliens during the exploration, statecraft, and warfare that churn and change our post-contact world.

But no world is defined solely by the main characters who occupy center-stage. Lost Signals digs deep into the lives and struggles of those beyond the spotlight. Twenty new voices tell twenty gripping stories that blur the line between fact and fiction in the Consolidated Terran Republic, where high-stakes war and intrigue has played out over four national bestsellers. Those same novels also garnered nominations for the Nebula (3), the Dragon (2), and won the Compton Crook award.