I had posted that I would be getting more up here, then I went on vacation, etc. So, in the interest of giving you something for your patience:

The Coolness, Boo, and I just returned Monday night from my parent’s home outside Spring City, TN. We were there with my brother and his family to reunite with kin and have some fun.
This is from Monday night, I think? That’s my dad on the right and my (older) brother hamming it up in the center. I had to put that he’s older in there, given that he still has his hair, damn him! I think, because after working our way through 2o some-odd years worth of Spanish Riojas (2007, 2008, 2005, some others) recollection is a bit fuzzy. 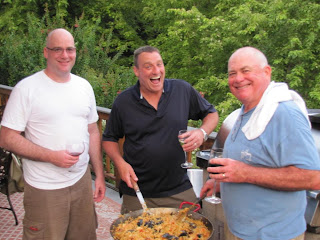 That’s paella we’re preparing. It was awesome. So sorry you could not have some (Not really, your absence meant more for me).
The night before was ribs, if I remember correctly. Then there were burgers and brats, as well as a fish fry night. And I won’t even tell you about the awesomeness at each breakfast.  Needless to say, I gained a few pounds while in the hot green of Tennessee.
The vacation was a great time, and Boo greatly enjoyed playing with her cousins all week. We did a great deal of swimming, water-skiing, fishing, and general-hot-day lazing in the sun.
The Coolness and I actually got free for one night for dinner in Chattanooga.
John Ringo and his wife Miriam met us in town. We had a nice meal and exceptional conversation. They had us back to their home, where The Coolness was introduced to all seven cats in the Ringo household while I had a tour of John’s writing cave, caught a glimpse of his process and got to read some work in progress. The Coolness even got a signed copy of Queen of Wands, which she’d been eager to read ever since finishing Princess Of Wands some years ago. An exceptional night.
The return trip was not so pleasant. The flight was fine, it was after landing in SF at 1030 PM that things began to go awry. As an experienced traveller, I went straight to where the luggage disgorges onto the carousel. I wasn’t quite in the preferred spot, but I was close to it, ready to grab my bag.
A woman came in from my right, stomped on my foot, reached across in front of me, and grabbed a bag. I bit my tongue so as not to curse and swear a blue streak in front of my daughter and the rest of the public. Stomper dropped the bag after discovering it wasn’t hers.
Balancing on one foot, I stumbled into the man on my left’s space. He hissed at me.
I apologized to him, “I’m sorry, but I just got stepped on.”
Stomper didn’t apologize at all, and continued to occupy the space.
“Lady, there a reason you don’t feel the need to apologize?” I asked.
She made no response, AND DID IT AGAIN when her bag arrived a moment later! When I had recovered sufficiently to decide whether or not to deck her, she was gone.
Foot throbbing, I waited for another twenty minutes while bags kept coming, none of them mine. I asked The Coolness to check with the lost baggage counter. The carousel stopped moving some minutes later, so I limped over and joined The Coolness, who was just getting to the front of the line. It was now nearing 1110 PM.
I handed across my baggage claim ticket and was told that the bag went to Atlanta and would not be arriving till the next day. I arranged for them to deliver the bag the next day and we got out of there.
Then began the long walk to the shuttle for long term parking. Followed by a long wait for said shuttle. Then the shuttle had to stop 9 times in the mile it takes to get to the parking garage.
We got to our car at 1200 AM.
On the drive home, a trio of moronic drivers raced between packs of traffic, swapping lanes without signaling and generally putting the public at risk. Stressful, to say the least.
So, to recap: Great vacation, and SF is full of people that are either out to hurt or stress me out.