Last night my friends and I played Warhammer Fantasy Roleplay. There’s not a lot new to that, except that we played on the new-to-me gaming table The Coolness was kind enough to allow me to set up in the garage. I built a pair of tables for Black Diamond Games’ game center back in 2007: 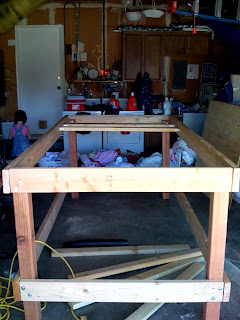 Yes, that’s a three year old Boo in the background. 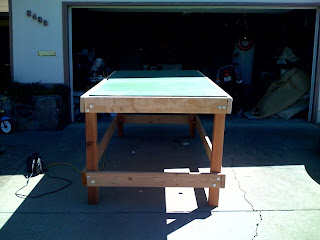 This is not the exact table, as this one was beat pretty bad in its storied career at Black Diamond Games.

The first table is, however, now gracing my garage again. With the eight-by-four table I was able to use about 88 percent of the Dwarven Forge terrain I own all at one time, a first. 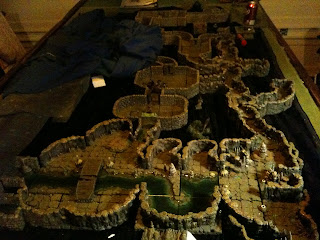 The players, my usual crew, enjoyed the display and accomplished a tiny bit more than I’d anticipated. Most importantly, it was fun. Fun for me and my players, who took to the rougher conditions with good humor and excitement. And now I can leave it up and not annoy the Coolness with my ‘toy soldiers’ and books lying about.

We knocked off at midnight.  I had a soccer game in Antioch, some miles away, at 0900. Last night was the time change. You do the math.

I made it in plenty of time. No one else was near the pitch. It’s cold and windy, and the pitch is both slanted and canted toward one end.

As go time approaches we’re short two players, one woman and one male. The other team has a very large roster, and leant us two players.

The first quarter was frustrating for the opposition, with several off-sides calls against them. They had several players who liked to shout out calls for the refs, who are really quite good at their jobs and needed no such prompting.

The field was a bit short, and the opposing goalie had a beast of a boot. He hammered one up and my center stop got a foot to it without stopping it. One of the refs-in-training, the center striker for the opposing team, shouts, “He can’t touch it!” as he races me for the ball.

I use my feet to clear the ball.

“He couldn’t touch it!” the guy continues to shout.

“You want to ref, jackass, put on a yellow jersey!” I grumbled.  I shouldn’t have. It wasn’t sportsmanlike, and I have no excuse.

Hearing me, he called me some version of fucker.

The ref, hearing him and failing to hear me, kicks the other player off for cursing. The quarter break came up immediately after.

As I am walking off, one of the yoked out players for the other team comes jogging up to me on our half of the field with his shirt off and stops me with a hand to my shoulder, asking me why I’m “Threatening players.”

My expression was, I’m sure, contemptuous. I told him to take his hand off me, that I hadn’t threatened anyone.

He didn’t immediately remove his hand, so I removed it.

Clearly, I wasn’t going to be able to communicate with him.

The ref, doing his job, came over and told everyone to shut it. The original ref in training came back on the field. I asked him to hold it a moment and spoke to the ref. I owned the words that led to the ref-in-training being sent off, and told him I wouldn’t be upset if we were both given a yellow card and played on. Most everyone on our team was worried the game was going to be called on account of the muscle-bound guy’s antics.

Thankfully, the ref didn’t card anyone, and play resumed.

And it resumed cleanly. Their offense continued to be upset with the off-sides calls, but there was nothing approaching the level of drama from that first quarter of play.

We won 3-0. I had three saves I’m quite proud of and about seven more collections that were mine to screw up. I played well, but the rest of our team really clicked and played outstanding ball. I hope we can continue in this vein, perhaps with less drama. It’s my first clean sheet since I began playing with the team, and I think I earned it.